Christmas is coming but not all Hong Kongers are getting in the Christmas spirit – with one in six (17%) believing that Christmas should not be a public holiday, new research from YouGov shows.

The survey finds that less affluent Hong Kongers are more likely than those with higher incomes to think people would work on the 25th December. Four in ten (41%) people earning less than HKD 40,000 a month are more likely to favour going into the office on Christmas Day compared to a 32% of those with a salary of more than HKD 40,000 a month. Similarly, older Hong Kongers (those aged 45 to 54) are more inclined to work on Christmas day, with a third (35%) in favour of the 25th December being a working day, compared to a quarter (23%) of younger citizens (aged 25 to 34).

YouGov’s research shows that although a sizable proportion do not think the 25th December should be a holiday, the overwhelming majority (84%) of Hong Kongers will be taking part in a Christmas work celebration. Over half (54%) will have a meal (54%), a third (34% will have a party (34%) and three in ten (30%) will put up decorations. However, one in five (22%) Hong Kongers think that offices should not encourage festivities, with men being much more lilkely than women to believe this (28% vs. 18%).

The data shows that just one in five (19%) Hong Kongers have taken part in Secret Santa – the office Christmas mainstay – where members of a group are randomly assigned a person to whom they give a gift. The identity of the gift giver is a secret not to be revealed until after the gift is opened.

Only a quarter (24%) believe Secret Santa is an appropriate activity while 10% think it isn’t.  The remainder are unsure. The main reasons people don’t like Secret Santa are that they feel pressured to participate (43%), that it is an unnecessary expense (35%), that it can be insensitive to other cultures and religions (30%), and that it is unprofessional (13%). 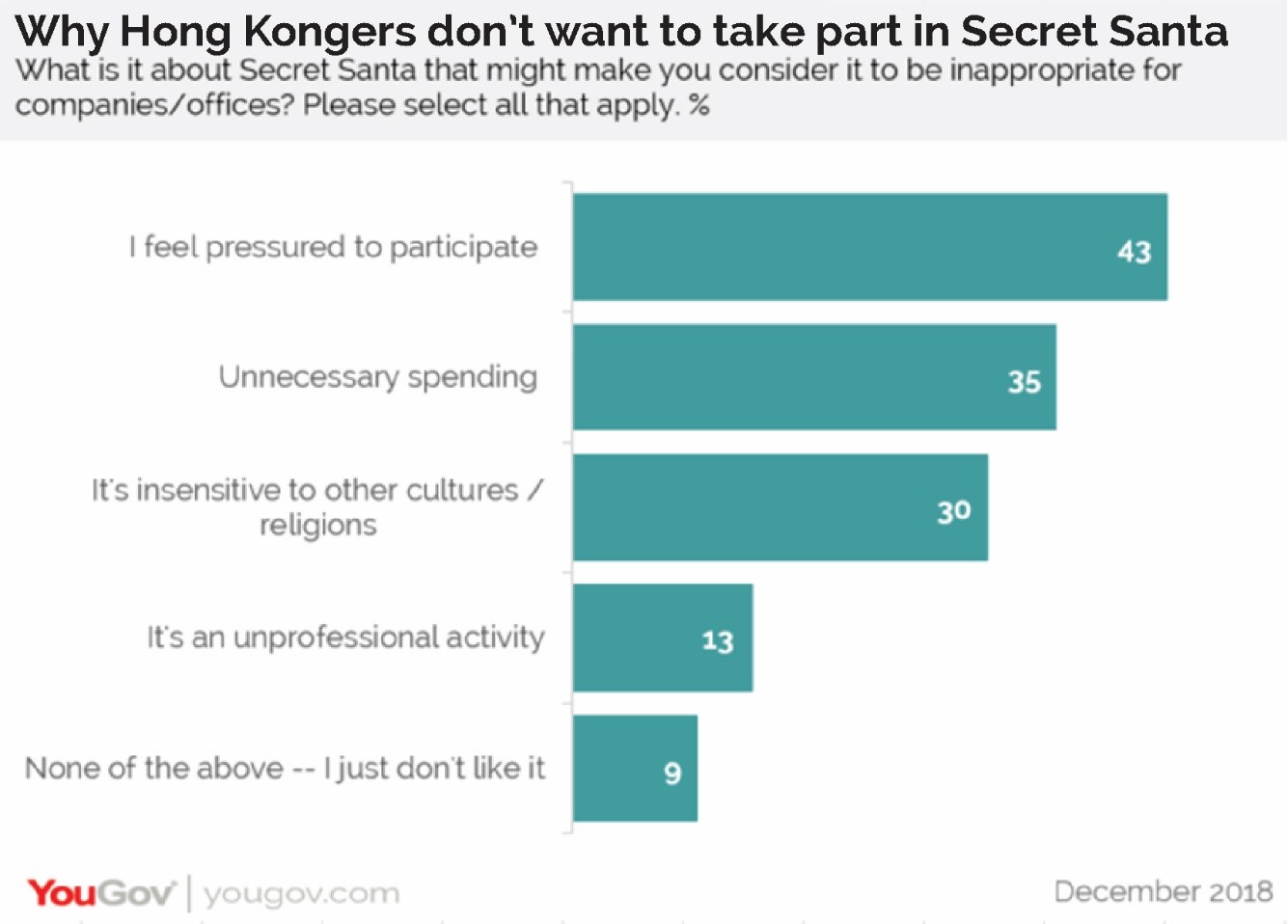 Jake Gammon, Head of YouGov Omnibus in APAC commented: “Hong Kongers have a complex relationship with Christmas. While many want it as a public holiday, a relatively high proportion don’t. Similarly, while take part in some celebrations, not that many will get involved with Secret Santa – something that is a mainstay in the Western countries.”

**Results based on 731 Hong Kongers surveyed by YouGov Omnibus.