With the Wuhan coronavirus spreading across the globe, and 425 reported deaths in Mainland China so far, latest YouGov research looks into sentiments about the outbreak.

Almost all (99%) of Hong Kongers have heard about the Wuhan coronavirus, and two thirds (67%) have expressed fears over contracting it. Women are more likely to fear being infected than men (72% vs. 61%). Though the Wuhan coronavirus appears to be susceptible towards the elderly, it is younger Hong Kongers that fear it more than older Hong Kongers. While eight in ten (82%) of Hong Kongers aged 18 to 24 are afraid of contracting the virus, this is only the cause for two in five (40%) of those aged 55 and above. Those with children under the age of 18 are also more likely to be afraid than those without children (74% vs. 63%). Of all Hong Kongers, three in ten (30%) are ‘very scared’, almost two in five (38%) are ‘fairly scared’. A quarter (25%) are not very scared and a small percentage (4%) are ‘not at all scared’. The remaining 5% are undecided.

Overall, the majority (79%) of Hong Kongers think that the government are not doing enough to contain the virus. Only one in six (17%) believe that they are doing the right amount. A small percentage (2%) believe they are doing too much, and the remaining 2% are undecided.

Looking at governmental measure that could be taken, almost eight in ten (77%) believe that anyone that has been in contact with a contaminated patient be quarantined. A similar amount (76%) believe that there should be an increase in facemask production locally. Almost a quarter (23%) think that more drastic measures should be taken, by putting Hong Kong in quarantine. 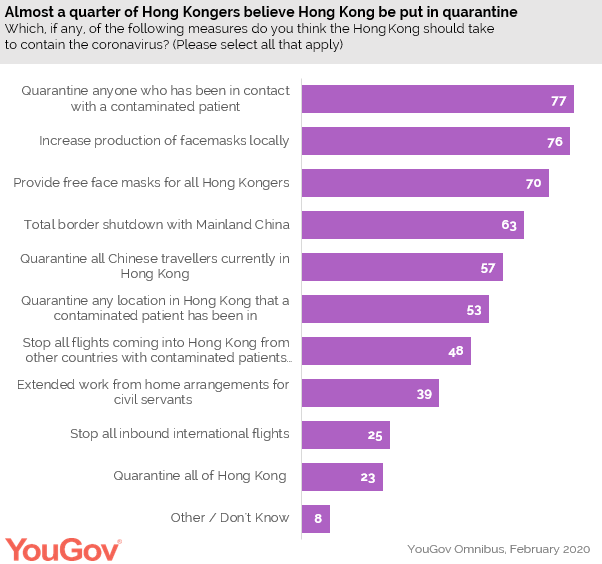 Jake Gammon, Head of Omnibus APAC at YouGov Omnibus commented: “As the Wuhan coronavirus dominates the media and people’s conversations, we were keen to find out exactly how Hong Kongers are coping with the outbreak. It is clear that a significant amount fear the virus, especially women, young adults and parents -- and the majority believe that more governmental measures can be taken. Even seemingly drastic measures, like quarantining the entire nation are favoured by quite a few.”

***Results based on 2,081 Hong Kongers surveyed by YouGov Omnibu