Rolex has the strongest brand advocates amongst Hong Kong consumers, second year in a row

The luxury watchmaker heads the list for the second year in a row, with a score of 65.8. The top three is rounded off with subscription video-on-demand service Netflix in second (64.9) and e-commerce platform HKTVmall in third (64.2).

YouGov’s rankings are a form of net promoter score and look at the brands’ current and former customers and analyse which one have the highest proportion of people recommending them to a family member or friend. 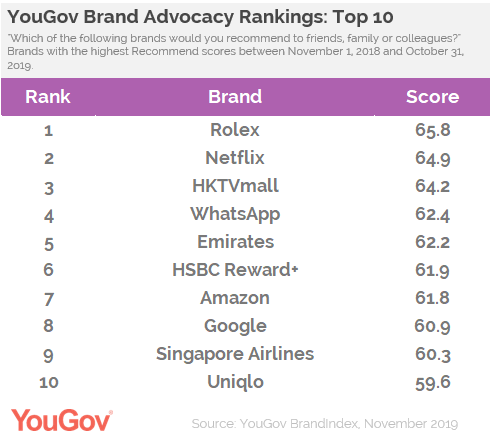 YouGov also reveals which brands have the most improved level of customer advocacy. Luxury hotel chain Ritz-Carlton comes up on top (with a rise of +11.7 points). It is followed by low-cost airlines Hong Kong Express (up +11.5 points) and American Airlines (increasing +9.2 points).

Ervin Ha, Head of Data Products commented: “Luxury brands might only capture a small part of the market, but amongst Hong Kong consumers Rolex has won over the market as the most recommended brand for the second year running. Recommendations are a powerful measure of a brand’s impact with its customers.”

YouGov BrandIndex screened all of its 345 brands for their net Recommend score, which asks respondents "Would you recommend the brand to a friend or colleague?" and “Would you tell a friend or colleague to avoid the brand?” Only respondents who are current or former customers of a given brand are interviewed. Rankings data was collected between November 1, 2018 and October 31, 2019, and Improvers data was collected between November 1, 2017 and October 31, 2019. All brands must have a minimum N of 200 and have been tracked for at least 6 months to be included in the rankings and at least 6 months in the prior year's period (as well as being currently tracked) to be included among improvers.

Airline brands also fare quite well. Dubai based Emirates comes in fifth (62.2) and Singapore’s national carrier Singapore Airlines in ninth (60.3). The rest of the top ten is completed with brands from various industries. Rewards programme HSBC Reward+ is in sixth (61.9) and Japanese clothing retailer Uniqlo in tenth (59.6). 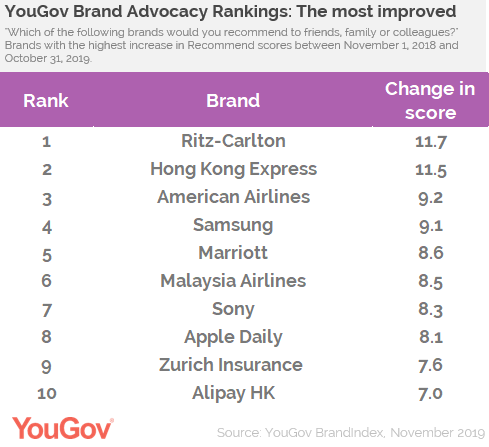